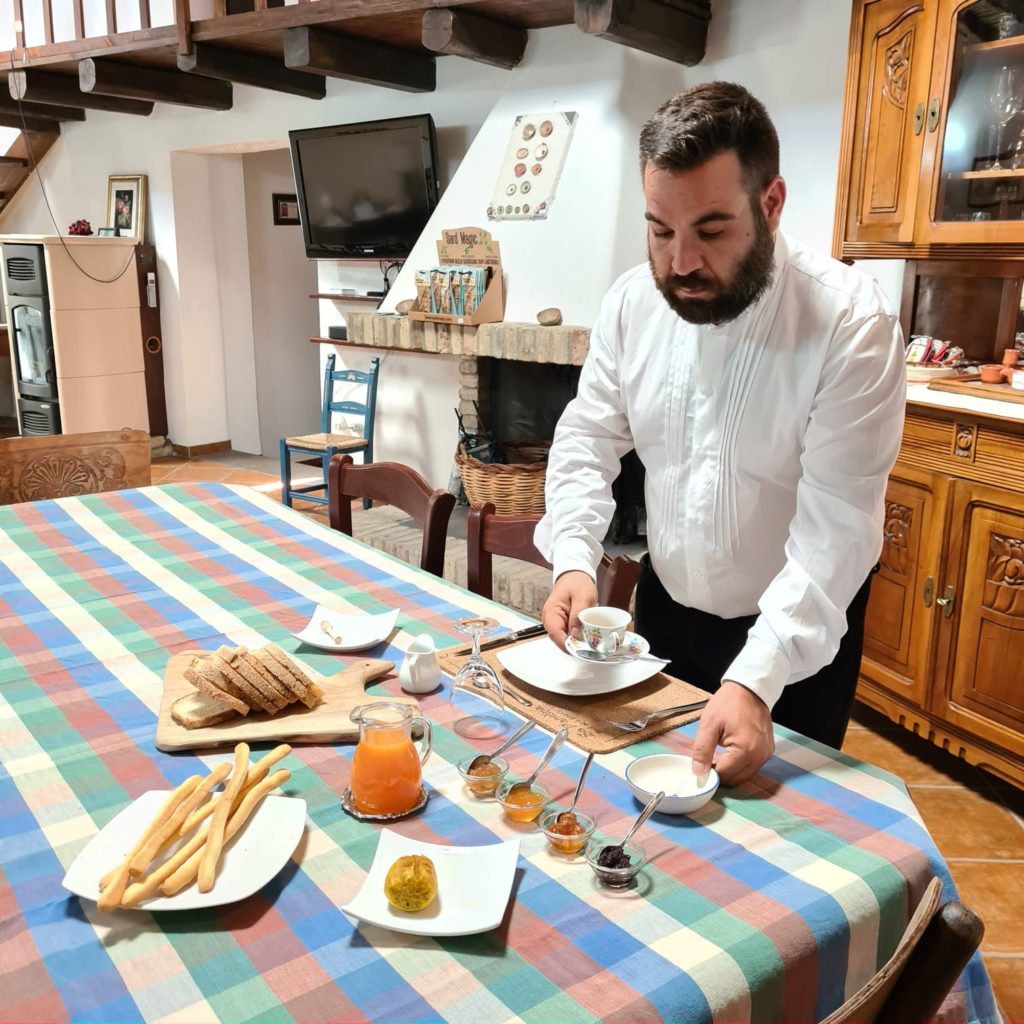 Published on 4 October 2021 On Non classé
There is a Sardinia beyond the coasts of the blue sea made of endless countryside, rolling hills, wild nature, and archaeological sites. It is the Sardinia of Sarcidano, an inland region of the South where a “magical” peace reigns, in whose silence the chirping of birds, the flowing of streams, and the musical melting of tree leaves make their way. Orroli is a small town set in this enchanting context, rich in places of interest. Here is why you should visit Orroli.

The area of Orroli has been inhabited since the Nuragic period, of which there are several testimonies including one of the most important nuraghi of Sardinia: the Nuraghe Arrubiu. It is the only example of pentalobate nuraghe existing in the island, dominated originally by a tower of about 30 meters. It has been nicknamed “the red giant” because of the reddish orange color of the stones that compose it, covered with ruby lichens. The nuraghe Arrubiu, discovered by Vittorio Anedda, is situated on the Altopiano di Su Pranu at a short distance from the town of Orroli. It is immersed in the countryside of Sarcidano. It looks like an imposing building that is to be admired inside and outside and in which to live the emotion of going back in time, to the centuries in which it was inhabited by the Nuragic people. Moreover, the territory of Orroli offers numerous testimonies of the Carthaginian, Roman, and medieval age. During the Middle Ages, the area belonged to the Giudicato of Cagliari, with the curatoria of Siurgius Donigala; it subsequently passed under Pisan domination first and then under Aragonese domination. It was the Aragonese, at the dawn of 1600, to annex Orroli to the Dukedom of Mandas (Editor’s note: today, the town of Mandas is a famous stop on the Trenino Verde (little green train) as well as a place described in the travel diary of the English writer D.H. Lawrence). With the Savoy dominion, Orroli passed to the nobles Tellez-Giron d’Alcantara, to whom it was redeemed only at the beginning of 1800.

HISTORICAL BUILDINGS OF ORROLI, WALKING AMONG THE ARCHITECTURE

Visiting the historical center of Orroli is like making a trip back in time. The small streets of the town hide in fact civil and religious architectural jewels. Of considerable interest, along Via Roma, is Omo Axiu or “Casa Vargiu”, a period building used as a museum where you can appreciate the history of ancient crafts. Always in Via Roma we can admire “Casa Schirru”, a private manor house built in typical style. In Via d’Arborea and in Via Nuraghe, there are instead the handicraft laboratories “Casa Carrus” and “Casa Sirigu”. “Villa Anedda” dates back to the 19th century and was restored at the beginning of the 20th century with the addition of neo-gothic elements and pretty decorations in terracotta. You can also visit the religious building belonging to the Demuro family and Largo Boi, where there is “S’Arcu S’Impiccu”, a place where in a remote past executions took place. Among the churches, it is worth mentioning the sixteenth-century San Vincenzo Martire, in Gothic-Aragonese style, embellished by a Moorish portal. The bell tower rises above the village and is undoubtedly one of the symbols of Orroli. The church of San Vincenzo Ferreri, in whose churchyard was found an ossuary with annexed cemetery area. It stands out for its ornamental rose window, the ancient portico, and the bell tower with double-light sail. Just outside Orroli, there is also the church of Santa Caterina, a rural chapel in Gothic-Catalan style with a stone exterior. To the Saint is dedicated the homonymous festival that takes place the first Sunday of June, during which people celebrate singing, dancing, and tasting typical local products. It seems that the first parish church of Orroli is instead that of San Nicola, which stands in the oldest district of the center. In the area of the church, excavated by expert archaeologists, there is the homonymous nuraghe (Nuraghe di San Nicola) and several nuragic huts have been found. The festival of San Nicola takes place in Orroli on May 26-27.

THE NATURE OF ORROLI: EXCURSION TO SU MOTTI PARK

To deeply breathe in the nature of Orroli, the ideal place to go is Parco Su Motti. The park is characterized by dense forests of holm oaks and oaks as well as ancient stones in whose ravines we find the famous domus de janas (Ndr. fairy houses). The trees of the park are secular. They have been here since the mists of time as well as the mountain “Pizziogu” with its overhangs, which make the landscape incredibly suggestive. The panoramic point on top of the mountain is interesting, from which the view reaches the lake areas of Mulargia, the peaks of Gennargentu, and the heights of the mountain of “Sette Fratelli”. Su Motti Park is the ideal place for excursions in close contact with nature. Most of the paths are easy and, for this reason, the place is also suitable for family trips with children. It is also not rare to see local fauna, including numerous species of birds (partridges, quails, blackbirds, thrushes, and the very rare red woodpecker). Also in the Su Motti Park, we can admire the testimonies of the Nuragic era, namely the nuraghi “Is Allonis” and the homonymous “Su Motti”. Here is a small path in the Park Su Motti. Just click the link, download wikiloc, and it will guide you to the Domus de Janas.

FLAVORS AND COLORS OF ORROLI: GASTRONOMIC DELIGHTS AND FESTIVALS

Visiting Orroli for a food and wine tour is an excellent idea. You should try specialties such as homemade bread and pasta, the famous maccarrones de busa, seasoned cheeses as well as cured meats and local meats. An authentic experience in the heart of Sardinia. Live, taste and savour the magic of the place. If you are looking for a place to sleep and go back in time, and relive with us the emotions of centenarians, then you are making the right choice.

Oct 4 There is a Sardinia beyond the coasts of the blue...

Trekking in Sardinia: 3 itineraries not to be missed

Red valentine’s day, when the color was of heart and not of area

how to find us

This can be a good place to submit yourself and your site or to include some credits. Bed And Breakfast Sa Pardina. A dip in the past between simplicity and refinement..